But it’s not sugar that causes caries. It’s the sugar-eating bacteria present in our mouths. Sugar (sucrose) provides the bacteria with energy, causing them to multiply and stick to the teeth’s surface in the form of dental plaque. What’s more, as they feed on the sugar, these bacteria produce acids that destroy the enamel on your teeth. So, the more sugar you ingest, the more damage your teeth undergo. And this is the vicious cycle that leads to cavities and other problems such as halitosis (bad breath) and gum disease.

But not all sugar is bad for your dental health. It’s the excessive intake of simple sugars such as sucrose (refined sugar) and glucose and fructose (found in fruit) that can cause these dental problems. On the other hand, some forms of sugar can even be beneficial for your oral health and help fight the harmful bacteria populating our mouths. Like for instance xylitol.

Xylitol is a type of sugar alcohol. Chemically, it combines the traits of sugar molecules and alcohol molecules which allow it to stimulate the taste receptors for sweetness on the tongue. Though alcohol is part of its structure, it’s not the same alcohol that makes you drunk or raises blood sugar levels.

Xylitol is considered a natural sweeteners as it is found in small amount in many vegetables and fruits, like for instance strawberries which are popularly used for DIY teeth whitening. However, the xylitol in commercial use is mostly derived from trees rich in xylan (a type of plant fibre), like for instance birch and beechwood. 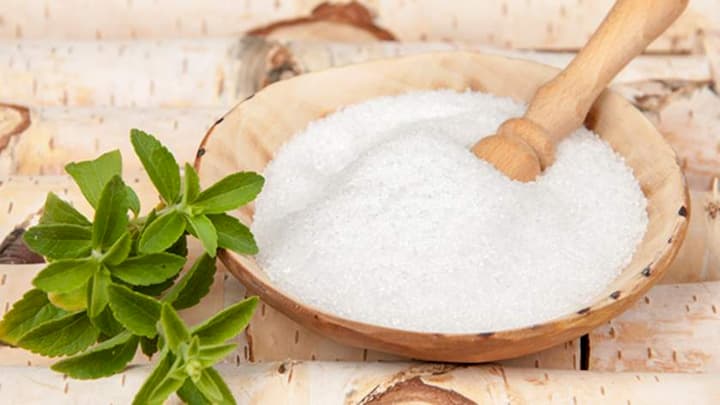 Xylitol is found to have negligible effects on blood sugar and insulin. Compared to regular sugar which has a glycemic index of 70, xylitol is only 7. This makes it a safe alternative to sugar for people with diabetes, prediabetes and other metabolic problems. And I’m sure you’re now wondering “Is xylitol good for weight loss?” Well, xylitol has 40% fewer calories than sugar, which means it can also be considered as a weight-loss-friendly sweetener. It’s also found to be good for the skin bones and have numerous other benefits.

How Does Xylitol Help Teeth?

Although there are many health benefits to xylitol oral health is what we’re going to focus on. The benefits of xylitol were first discovered in a Finish study in the 1970s that evaluated the effectiveness of xylitol on dental plaque reduction. Today, more than 35 countries, including Australia, have approved the use of various xylitol oral health products such as chewing gums, toothpaste and mouthwash.

So, how does xylitol manage to boost dental health? Remember those bacteria we talked about? Well, they use simple sugars for energy, but they can’t use xylitol. So, by replacing sugar with xylitol, you reduce the amount of fuel for the bad bacteria.

But even though these bacteria do not benefit from xylitol, they still absorb it. And after ingesting xylitol, they aren’t able to use glucose for quite some time. In other words, they don’t receive any energy so they end up starving to death. Studies have demonstrated that using xylitol dental products can reduce cavities and tooth decay by 30 – 85%.

However, the benefits of xylitol for oral health go beyond prevention. Taking xylitol can also help repair some of the damage that has been done. Like any other sweetener promotes saliva production. And saliva not only helps clear away food particles from the teeth but also contains proteins and minerals that help strengthen the teeth’s enamel and repair early cavities.

What Chewing Gums Have Xylitol in Them?

Different chewing gum brands contain different levels of xylitol. On the Australian market, the gum with the highest level of xylitol is Epic, containing 1.06 grams of the sweetener per piece. Next comes PUR gum with 1 gram of xylitol, followed by Spry and Xponent with 0.72 grams. 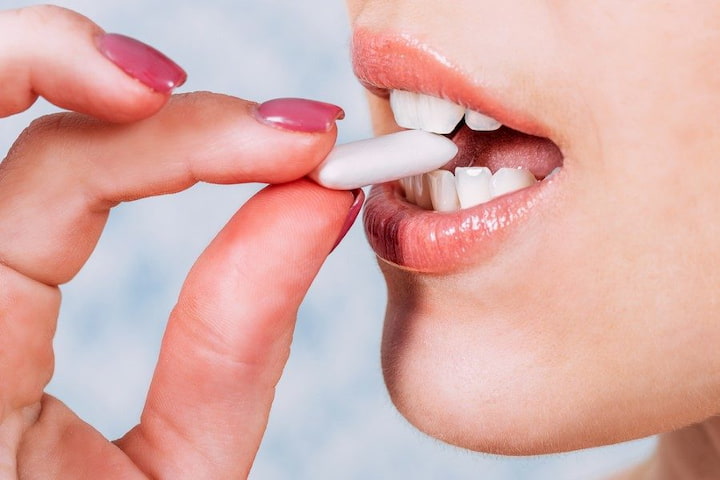 The easiest way to reap the benefits of xylitol is to take it in the form of chewing gum. But you may wonder is chewing gum good for teeth when it’s actually a form of candy. And candy is definitely bad, right? Well, chewing gum actually has beneficial effects (saliva production, helping to eliminate food particles), but these are all undone by the presence of sugar. In other words, chewing sugarless gum is completely fine. And even better if it contains xylitol.