Morale patches have been around for quite some time now. And while their initial use was to build unit pride and boost morale in the military, today it has become much more widespread. Nowadays, you can see hunting or camping groups personalizing their equipment with tactical gear patches. Whether that’s for practical or humorous reasons, people put these distinctive details on their bags or clothing for numerous different reasons. But what’s the history behind morale patches, and how did they preserve their unique appeal throughout all these years?

As aforementioned, tactical gear patches and morale patches were first used by the military. By their very nature, they’ve been kept low-key over the years as squads were kept out of trouble with the rules and regulations of the army. They were an easy way to add or remove a bit of personal pride. Morale patches used in the military were either peace symbols, medic symbols, or “death cards”. There are even records of hand-stitched patches being used in special OPS groups that didn’t have formal commands.

Later on, when young Americans went to the streets to protest the Vietnam war, a new (counter)culture arose – the hippy culture. Hippies also wore patches on their clothing, but unlike the military, they only wore patches with flowers, peace signs, love and nature symbolism. And that’s what they stood for. And while the hippies weren’t focused on the mainstream, their movement affected mainstream trends worldwide. 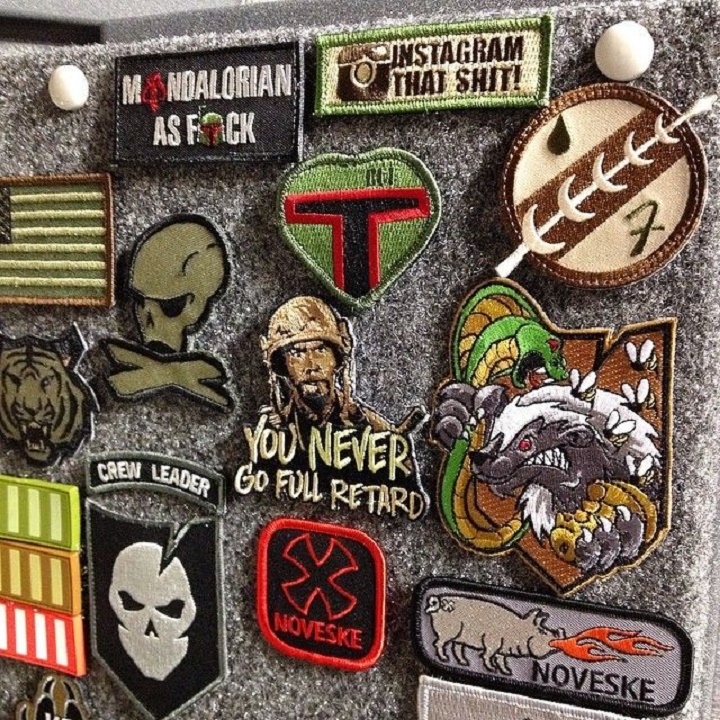 So now we had people wearing patches as a part of their fashion style instead for moral reasons. The patches were typically made of cloth and were stitched or printed onto their flowy, natural dresses or denim. Whether stitched or printed, satirical or cheeky, the radical patches hippies wore looked cool and showed off aspects of their movement.

After the hippie movement, somewhere around the late ’70s and early ’80s, arose another popular one – the punk movement. Young people were done with the peace and love, and they started solving their problems with spikes and anger. It was all about anarchy now. Street punks started wearing patches of their favorite punk, rock, and metal bands on the backs and shoulders of their ripped denim vests and leather jackets. However, the purpose of the patches remained the same – a badge of personality, identity, and to some extent – solidarity.

And then, there’s the present. Patches have made it through many social causes and multiple wars, allowing people to express themselves and personalize their clothing. But today, there’s no need for a special cause to wear patches. So whether you’re wearing them for fashion purposes or functionality, you do you, nobody will judge you for it.